Assessing Emerging JavaScript Platforms with Express.js and Node.js – What to Look For

Node.js is known as one of the most important emerging technologies. It is an event driven open source runtime to create server side applications. It is a highly customizable server engine that is popular amongst JavaScript coders to create real time web APIs. It processes in a loop and sets up to respond to the requests.

Changing the paradigm, the JavaScript code runs in the back-end, outside a browser. Applications are single threaded; therefore it’s necessary to build or write a Web server besides the application logic.

In order to avoid writing the Web Server code, this emerging technology is Express.js, or also known simply as Express. Express is a minimal and flexible Node.js web application framework that provides a robust set of features for web and mobile applications.

Given the novelty of this technology, several security aspects are missing or misunderstood. Therefore, VerSprite tried to include common issues related to Node.js and Express, which could apply to other new technologies as well.

The problems to be addressed were documented and tested. It is important to use a method to test all known vulnerabilities and document all the security test activities.

JavaScript has two scopes: global and local. A variable that is declared outside a function definition is a global variable, and its value is accessible and modifiable throughout the program. A variable that is declared inside a function definition is local. It is created and destroyed every time the function is executed, and it cannot be accessed by any code outside the function.

These properties could mean a change for most developers, if misunderstood or with limited knowledge of this inherent property, writing secure NodeJS web apps will present a challenge.

Take the following snippet of code for instance: 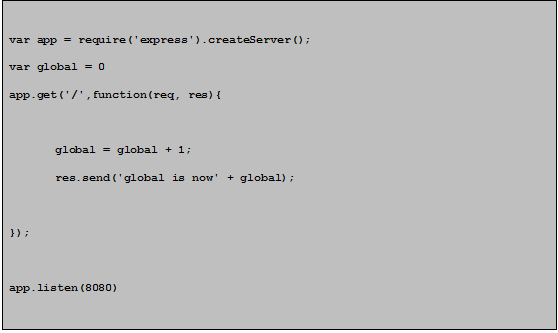 In relevance to this code, each request will increase the global variable gbl by 1, as seen in the screenshot below for two different requests. In a PHP script, such a model would only show 1 for every request. 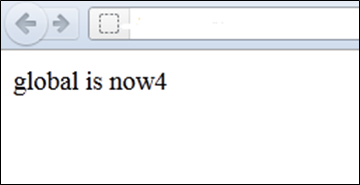 Depending on the context and sensitivity of a global variable or function, an attacker could exploit this behavior to her benefit to achieve desired effects. What could those be:

“Supplying multiple HTTP parameters with the same name may cause an application to interpret values in unanticipated ways. By exploiting these effects, an attacker may be able to bypass input validation, trigger application errors or modify internal variables values. As HTTP Parameter Pollution (in short HPP) affects a building block of all web technologies, server and client side attacks exist.”

Take the following snippet of code for instance:

When accessing this application, we can observe an ‘undefined’ string in the response, given that no arguments were assigned, as shown below. 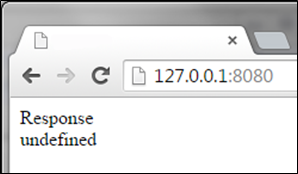 As an exploitation example when we pass to the variable ‘name’ the value ‘process.kill()’, through the URL query string, the current process will be terminated by the attacker, thus disrupting the service’s availability. 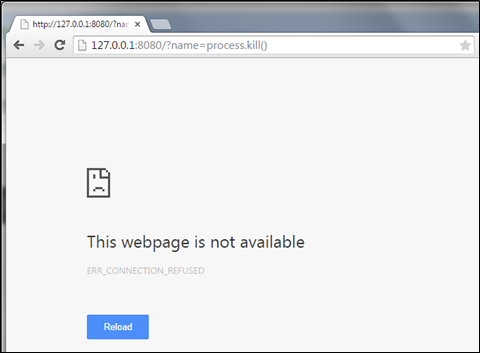 In case an attacker would want to execute arbitrary code in the affected application, open-source tools are available such as the following Node.js shell: https://github.com/evilpacket/node-shells

A tool like the above would generate a payload to be passed through the vulnerable input, containing a shell code and the attacker’s IP address and port. After the payload gets executed by the eval() function, the remote server will connect to attacker machine were she will be listening for new connections.

Node.js can be vulnerable to Command Injections attacks just like any other programming language. The following snippet of code presents this scenario by using an application meant to ping other hosts, further we’ll observe how to exploit this attack by injecting other commands through the input.

When we request this resource, we will observe a ‘Hello’ message since no data has been passed yet:

Now if for example we decided to ping the host ‘127.0.0.1’, we would observe the server’s output execution of the ping response. For this, the parameter ‘?ping=127.0.0.1’ is appended to the URL query string. 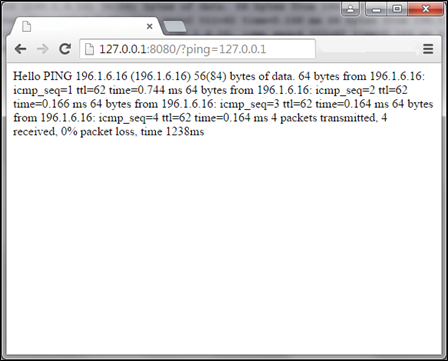 However, if we add a semicolon and another command to the end of the URL, the command is executed by the ‘child_process.exec’ function since it is passed along as a shell command in the newly spawned ‘/bin/sh’ process. For instance, below we concatenated the command ‘cat /etc/passwd’ to read the file from the server. 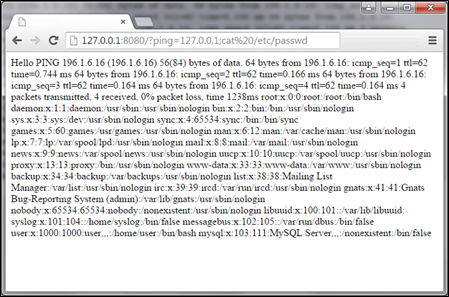 Emerging technologies such as Node.js in conjunction with Express.js can suffer from common attack injections such as Cross Site Scripting, SQL Injection or XPath Injection.

Take for example the following snippet of code:

When accessing the application coded above, first we can observe a ‘Hello’ message as shown in the figure below.

By assigning a value to the variable ‘parsedUrl.query.name’, its content will be reflected on the server’s response.

Given the lack of sanitization in this input, any type of character can be included to be reflected thus allowing embedding HTML or client-side JavaScript code. This is also known as a Cross Site Scripting vulnerability. 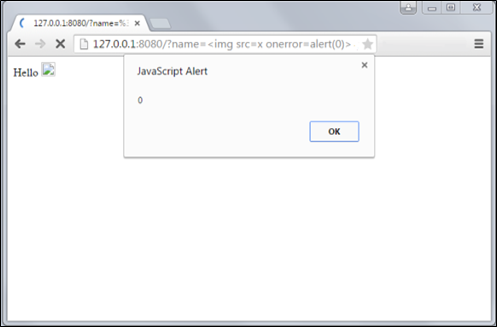 The Regular expression Denial of Service (ReDoS) is a Denial of Service attack, that exploits the fact that most Regular Expression implementations may reach extreme situations that cause them to work very slowly (exponentially related to input size). An attacker can then cause a program using a Regular Expression to enter these extreme situations and then hang for a very long time.

The attack surface for Node.js in regards to loss of availability is quite large, as it deals with a single event loop. If an attacker can control and block that event loop, then nothing else gets done.

For instance, the code below is attempting the common task of validating an email address on the server side.

Following we can observe the impact of this vulnerability by measuring the response time of every time the regular expression gets executed. With a valid email address the regex took 0,9694442ms.